skip to main | skip to sidebar

It's been over half a year since I last wrote...meaning we have been extremely busy.

Presentation of movie "Gasolina" in the park of ciudad Vieja.

The arrival, Jornada, break down and repair of our ultrasound machine... now we are using it and the clients are happy to get everything done here and at once.

For the same reason we have implemented simple lab tests: Type and Factor, Hemoglobin, UA.

Since Sandra, our  addition since May, is studying to be a lab tecnician, we are seriously thinking about adding still more lab services.

Both Gabi and Sandra have been very busy with administrative issues. they are inventing (!) a  database, with help of Sandra's friend Melvin, a computer wizz.

We are surpassing out set goals for this year already! Many more clients, many more users of contraceptive methods and several more births, with relatives signing up after they hear about the first women's experience.

Below a picture of a recent birth...

Right now Jessica is here , reviewing financial issues. Tomorrow there will be a board meeting, with hopefully more people singning up for the association. There will be pictures of that event as well! 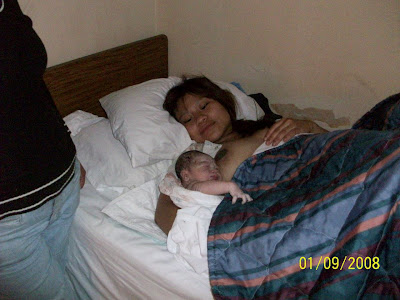 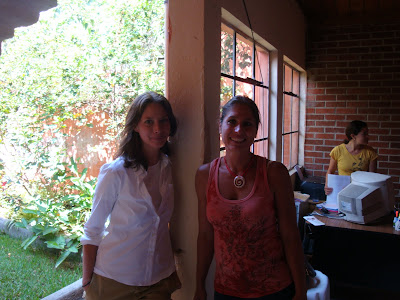 We had a visit from Christy Turlington and her film team for the documentary on maternal and child health she is directing!

Besides learning lots of new info on recent development in strategies concerning maternal and child health, we also hadd a good time, visited Doña Marcela in San Antonio who was interviewed and we shared our birth experiences with Christy...

I am very much ashamed for not having written in about half a year... but one could see it as a good sign, too: we are busy!

While I was talking about not one sole client in the last blog, that has definitely changed. Now some days we see as many as 12 people!

Several births have taken place and every day there is at least one  new woman for prenatals. Not all of them stay with us for the birth , actually just very few do. that has to do both with lack of money and with lack of faith... people have been very much brainwashed against midwifery care.

But the few who keep their faith and have their baby with us are usually vey happy afterwards...like Blanca, who left 200 Quetzales more than we asked from her, because she enjoyed her experience. 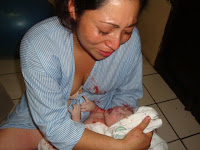 We have done so much!

The fact that actually some people can not pay for their care, even though we are charging hardly anyhting  also brought about the idea of an emergency fund, which I am talking about now in several organizations, starting with my old Rotary club in Guatemala City. they spontaneously handed over a little check, even before I had finished my presentation!

But there is so much missing... one of our fetal dopplers is abot to die, we need basic lab equipment...no end to it!

Since it will be my job for the next funding period with PPFA to go out and look for additional local funding ( since PPFA funding is scarce... I guess we just learned the hard way one of the lessons in the NGO world: if you are doing well, your funds will be cut, so you won't fly tooo high...).

The good new is that we are getting a new coworker, starting in April!

Sandra used to work at Behrhorst clinic in Chimaltenango, and she is going to help Gabi with administrative stuff, but she is also trained to do rutine clinical work, since she is an auxiliary nurse. She fits right in and I am sure that we are going to have a lot of fun together...besides being extremely productive, of course!

We are having an article published in the Antigua magazine La Cuadra ( thanks, Jessica A. and Mike), which I hope might bring us some local fnding as well.

For this next period I have planned , among other things, to teach a CPR course for staff and traditional midwives, to start a basic lab, get me trained to do ultrasound....oh yes, the machine is supposed to be coming! Whatever that means, since it is in Costa Rica, of all places...

we need to repaint the clinic, with some stuff that will keep the humidity out.

Talking aout our space: this place is a good plce for starters, but in the long run we would like to build our own cllinid. gabi will write grants for that and for the school for midwives we hope to be able to have in the long run. So much for now!

Hannah
About me...that takes some thinking. Guatemalan by choice, German before. Here since 1988, 4 children, one granddaughter, an ever changing number of animals. Midwife, activist on several fronts. Always busy, never bored. Scared of many things, but nobody will ever know. Very happy, thankful for each minute. Full of plans.